As you may have heard, Monday was a holiday in Massachusetts. Not, as some would have you believe, a holiday to celebrate the Boston Marathon, but that is certainly one way many people celebrate. In actuality, Monday was Patriots Day (also, not in celebration of the New England Patriots, as many believe), a celebration of the Battles at Lexington and Concord which began the Revolutionary War (it was actually April 19, but it’s celebrated on the third Monday, and the day off for most workers helps clear the streets for marathon runners/observers).

Many people begin their day with a 5 a.m. commemoration and re-enactment in Lexington, but we are not insane, and settled for the re-enactment of the North Bridge Battle outside Concord, a little later in the morning.

As we found ourselves at Minuteman National Park, watching the group re-enact the North Bridge Fight, we were impressed by the care participants took with their costumes to ensure historical accuracy. Unfortunately, not all of the participants remained “in character” until they were off-stage.

Cell phones were all the rage in Revolutionary War times. That story you heard about Paul Revere? Pish. He just sent a blast text and went back to his PlayStation.

Before Starbucks and Dunkin’, coffee was served in black, logo-free cups. 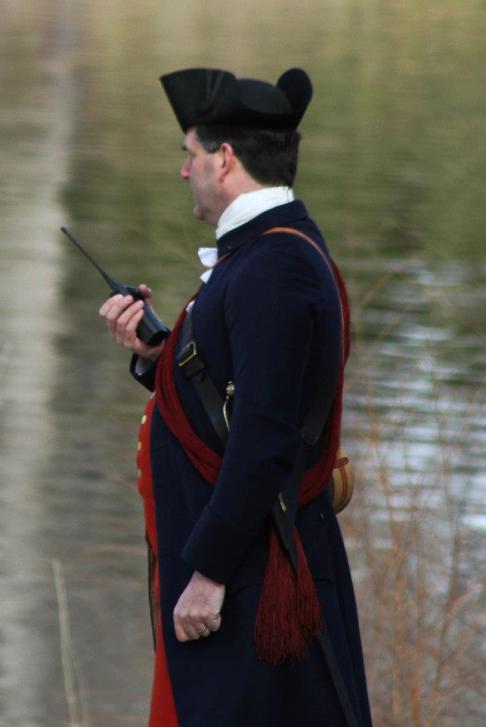 Walkie-talkies, for the soldiers who were on AT&T, and didn’t have service at this location. 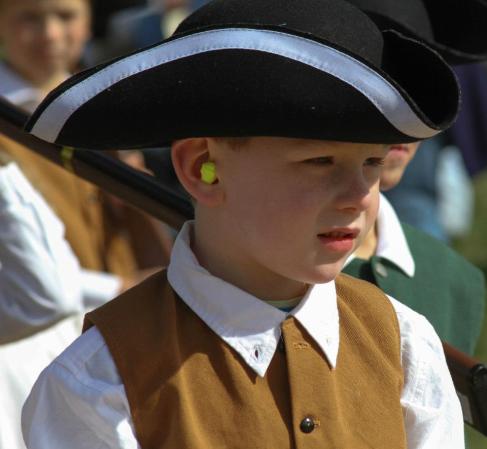 Ear plugs, obviously were part of any soldier’s equipment.

Even the Redcoats have AT&T. 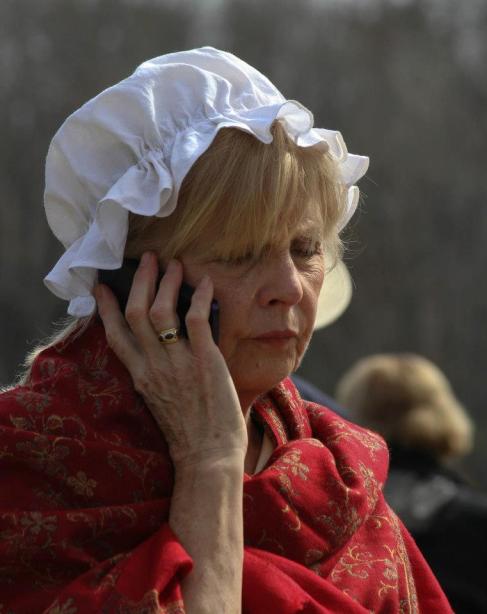 Keeping in touch with the Minutemen, so she’d know when to bring sandwiches to the battlefield.

There’s been so much tragedy all over the world this week, I can’t even begin to express how badly I feel for the people involved. Instead, I’m going to try to bring a little light to my readers. Flowers! It’s finally spring, flowers are blooming, and there is beauty to be found in unlikely places. I challenge you to look for some beauty, as well.

I do not know what type of flower this is. They were very small, mixed in among the grass at Minuteman National Park near Concord, Mass.

Spent a couple hours wandering downtown Quincy last night, and made the above image of a magnolia blossom from a tree between City Hall and a small cemetery where many Revolutionary War soldiers are buried. The image below is from a cherry blossom tree in front of city hall, in the last light of the day.

I hope your day is blooming with beauty.

This church in Concord, Mass., was crying out to be photographed. The clouds were, too. Concord’s a beautiful little town – I highly recommend a visit if you’re in the area!