Somehow, I forgot to share with you photos from the New England Patriots’ Super Bowl victory parade earlier this month in Boston. Forgive me, please. Here are a few of my favorites. 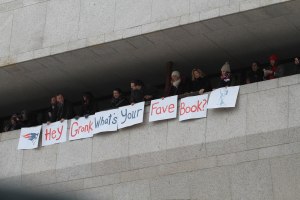 Fans waiting for the parade to begin. The group in the picture just above was on one of the upper floors of the huge Boston Public Library, unfortunately, Gronk didn’t appear to see the sign when he drove past. 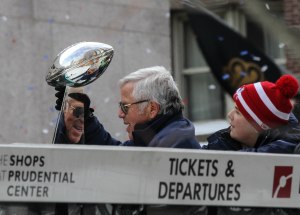 Team owner Robert Kraft, checking his makeup in the reflection from the Lombardi Trophy. 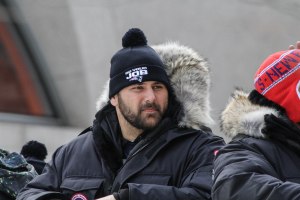 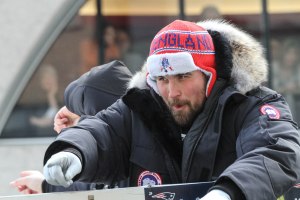 Random players (your guess is as good as mine – I’m not a Pat’s fan, and besides, they always wear helmets!).

Julian Edelman (or as Sports Illustrated recently called him, “Julius”), seemed to be having a good time.

Fun with names. Also, he (LeGarrette Blount) was on, I believe, the far right three pics up. You may remember him from that game a few years back when his Oregon Ducks lost to the Boise State University Broncos, and LGB took issue with something a Bronco player said, and slugged him, in front of a running ESPN camera. Sadly, his 15 minutes of fame did not end there (also not a Duck fan. Or as I like to call them, *ucks).

Team party animal Rob “Gronk” Gronkowski, seconds before he took off his hoodie and tossed it into the crowd.

Fun day, and not too cold, which was nice. And, it was two or three blizzards ago, so there was only three feet of snow on the ground.